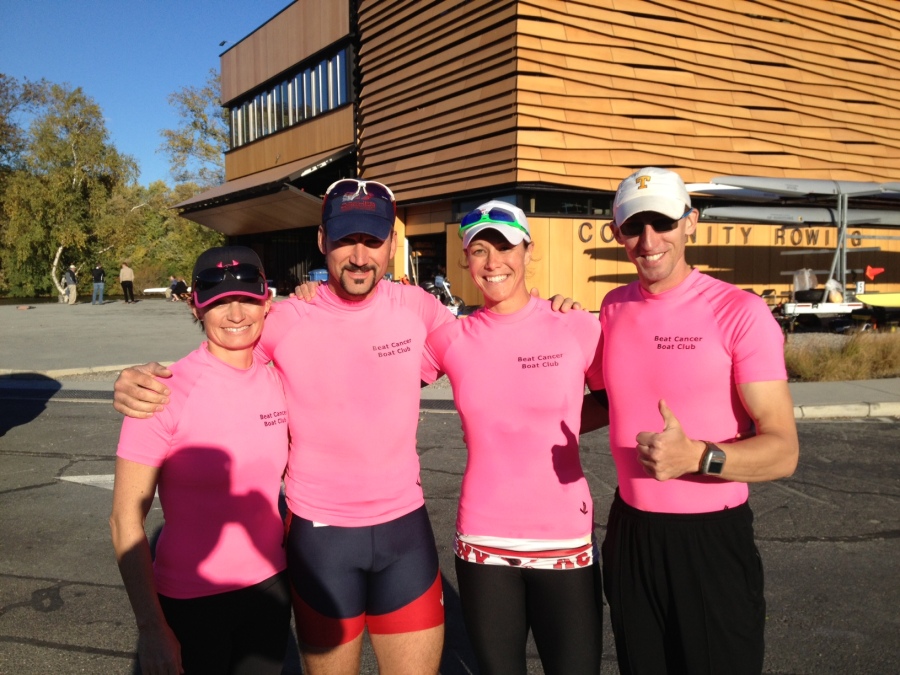 A little over three years ago, I met two people that would come to strongly influence the rest of my life and help shape the beginning of my rowing career. In my few short years of rowing, I’m lucky to have built quite the “rowing family.” Due to my unusual entrance and ascent into the sport, I’ve met a lot of fantastic people that have helped me along my journey in a variety of ways: whether it was learning the very basics of left over right, helping me pick out my first elite racing shell, or jumping into a double with me when it was clear that I was nowhere near their skill level at the time, I’ve been so fortunate to have people give me their time and support. I’ve come a long way in a very short time due to the army of unbelievable people walking beside me.

Pam Besteman and Brian Tryon became my pseudo-rowing family when I first picked up an oar in the fall of 2010. It was recommended to me to contact Brian by my (Master’s) club coach at the time, Brian Wendry at Riverfront Recapture, who knew of an elite lightweight sculler and his wife training out of the Trinity College Boathouse just up the river.

I was eager to soak up as much knowledge from anyone and especially someone “in the game” like Brian and Pam. I literally had no idea what I was doing or what exactly to do; but I knew I wanted to go after this newly found dream. Brian had several years of sculling experience and was just coming off of his second year as a member of the Senior National Team in the lightweight men’s quadruple sculls. His wife, Pam was quite the rower herself, competing nationally as one of the top lightweight master’s scullers along with several years of collegiate coaching experience. I immediately reached out to see if they might take me under their wing.

The rest, as they say, is history.

Brian and I trained together every day, sometimes twice a day for nearly a year before I would be invited to join the USRowing Training Center in Princeton. Pam joined in on the fun several days a week, oftentimes hopping in the double with me, coaching from bow and even stroke. Brian would later tell me that when I first contacted him, he had figured it was a 50/50 chance I would even show up that first morning we had scheduled to train together. “Who was this girl?” was what had gone through his head. Ha, I showed him.

My introduction to GMS and Guenter Buetter came through Pam and Brian, and with that, I was exposed to an entire group of elite athletes and an elite training plan. The three of us would carpool on the weekends from Hartford to New Milford, CT where GMS is located, sharing grumpy early mornings, excruciating workouts, and exhausted car rides home.

It was with Pam that I actually won my first official race in the “women’s intermediate double sculls” at the 2011 Independence Day Regatta on the Schuylkill River in Philadelphia. It was…pretty ugly. But I was ecstatic. My first win! So what if we were competing against mostly college kids? And I’m pretty sure someone asked “who those middle-aged women were” as we were launching to warm-up. The fact that it was maybe my third 2,000-meter race ever and that she was used to 1,000-meter races (Master’s race length) didn’t keep us from celebrating our small victory.

Flash forward to present day and they have since moved to California and I to Princeton, New Jersey and more recently, Oklahoma City, Oklahoma. Although we live in opposite parts of the country, they still remain a big part of my rowing journey.

A year ago, at the age of 38 Pam was diagnosed with breast cancer. I remember the shock that paralyzed me as I listened to the news over the phone. There was just absolutely no way that someone so young, so fit, and so healthy could have cancer.

Like the stubborn, fire-spitting control freak that she is, she took the reins and is kicking cancer’s ass. Along the way, she has found the time to make sure that her experience would somehow benefit others. She created “Beat Cancer Boat Club” which in its early stages, exists as “a community of rowers who have faced Cancer as supporters, survivors, and thrivers.” The goal is to support each and every rower facing cancer, to share their stories and to encourage others to share theirs.

This past fall, I raced the 49th Head of the Charles Regatta with a Director’s Challenge Mixed Quad representing “Beat Cancer Boat Club” with three great friends: Brian Tryon, Mike Sivigny, and Michelle Nielsen. We raced in support of Pam and we raced in support of all of our friends, family and everyone who knows someone who has won, lost or is currently fighting their battle with cancer. I gotta say, we looked pretty damn good in our hot pink BCBC shirts.

Pam’s “cancerversary” was just last week. I continue to be inspired by her overall life approach and daily perspective. My favorite word to describe her has become “badass” as she most definitely is one. Over the past year, Pam barely missed a beat. She continued to be involved in rowing and her other love, running. Only two months after being diagnosed, she coxed a men’s eight at the 2013 San Diego Crew Classic. At the 49th Head of the Charles in October, she coxed the Grand Valley State women’s alumni eight. After undergoing several months of chemotherapy and while still in the middle of radiation treatments, Pam ran a 10K race in November and then two weeks later, the North Face Endurance Challenge 1/2 Marathon. She says that training and racing allowed her some sense of normalcy during such a crazy time.

Last summer while I was racing in the National Selection Regattas, World Cup and World Championships, she served as a huge inspiration helping me to manage the ups and downs of competition and training. Being an elite athlete and training two to three times a day is exhausting, but it’s recess compared to undergoing chemo and radiation.

And so in honor of her courageous fight and for anyone else experiencing the same battle, I wanted to share that inspiration.

No excuses. Live each day to its fullest. Fight on.

3 thoughts on “Fight On”